EDIT: After purifying the hell out of myself, the status menu works again. I suspect it may be related to the number of traits that you have.

I am currently using version 0.C-8014. Only mods I’m using besides some of the packaged ones are Shard’s Misc. Mod and Book Scanner Mod. Any fix for this? 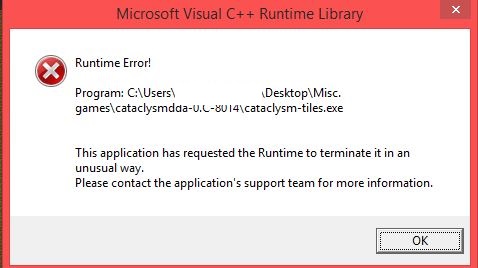 Edit: Just in case, I’ve been having another bug, but it is likely unrelated, since it hasn’t seemed to affect gameplay and I’ve had it since starting using this experimental version. I’ve been getting this error during game loading. It seems to be related to the fusion blaster arm cbm. 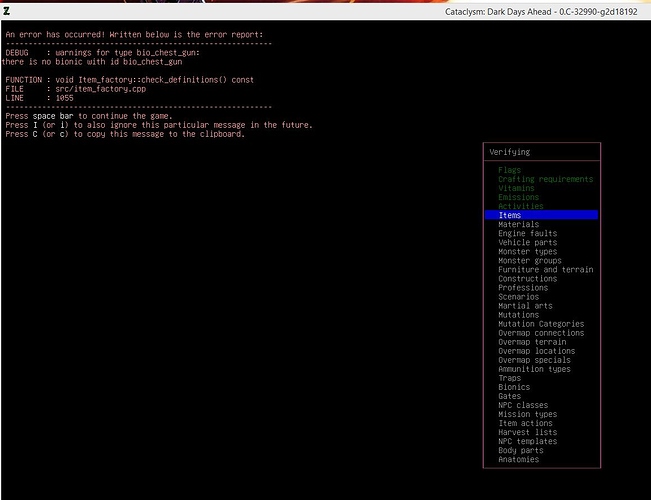 Have you had any other problems with mutations before? I ask because I play the experimental and I’ve tested most of the mutations and haven’t had this issue in my play testing. If you’ve had other problems it might be a MOD conflict. I’d suggest trying it without any mods but the base game. If you haven’t then I’d say it might be corrupted files in which case replace it and transfer what you can.
Best of luck mate.

That debug about the bio_chest_gun is from the mod Crazy Cataclysm, it is referencing a bionic that is no longer in the game. You can make it go away by removing the mod or by removing that bit from one of the mod’s json file.

I’ve never really mutated before. I just started experimenting with it. Why does the problem go away when I remove my mutations? I don’t think any of the mods I’m using should affect them.
This is my mod file in the save:

I just used debug to remove my wool allergy, which I had to start with, and it fixed the problem. Then I used another hit of alpha serum and got two more mutations, and the problem started again.
I think I have too many traits? Is that possible?

No you can’t have too many it just scrolls down and becomes longer same with skills, mutations and bionics.

Is there any way to make the game spit out a crash or debug report or something?

You can make it give you all the information through the debug mode. If you don’t have it key bound then go into you key bindings and type debug it should bring up two options then bind the debug mode. After you activate it it will spit out the game’s processes so like where mobs are going and other stuff like that also it will tell what it’s doing when you mutate. Not sure if it will give you the info you what but hope it helps a bit.

Yes, it’s logged every time you launch the game. Go to CDDA>config>debug.log

I checked through the logs, and as far as I can tell, the error event is being recorded as “Log Shutdown”. In game debug mode doesn’t even acknowledge the event.

Where I am also having ctd problems. Does debug spit out the reason for the crash or is debugging only while the game is active?

Nothing would be please me more than to not ctd after 15 minutes repeatable.

It appears to be a known bug due to size of trait/cbm list being larger than the screen size. Not sure when a fix will be put in.

Can anyone confirm or not if an NPC could cause this? Perhaps it is somehow a bug whereby multiple characters with X amount of mutations and cbm can cause the same crash when in the reality bubble?

Perhaps too many causes a glitch? Could a bionic whatcha callit enemy cause the bug too? Those guys in crashed helicopters and labs.

No, I have boatloads of bionics, I tested removing a few to see if I could buy myself some space for more mutations, and it did not help. The bug is only affected/caused by traits.

Dude best I can tell you your files are corrupted or damaged.