Crafting engines from scratch (tl;dr, no)

I’d suggest building a mod to craft actual engines that start at mechanics 9 for the V2 Inline and Ends at 14 for the V12 Diesel. Same for Electronics 11 and 12, with the Electric Motors.

Honestly, I think that electric generators/alternators should be craftable (making one is actually fairly simple, as is making a transformer and rectifier to turn the resultant AC into DC.) It’s a bit more complicated to reverse the process of electrical/mechanical power conversion, but should be within the capabilities of the more advanced Survivors.

In fact, I might make a mod for survivor crafted alternators/generators (which won’t be as capable as something precision manufactured, nor as durable) and motors. Possibly even a few other elements that aren’t as difficult to make as people seem to think (though, as with anything hand-made, not generally to the same precision standards as manufactured items.)

I’d love to be able to make a windmill vehicle “engine” (that only works when the vehicle is not moving) that could generate power based on the wind (and then electricity through alternators.)

Not really. It’s covered in first semester classes in electronic technician or industrial maintenance classes in community colleges, the textbooks of which are very common in public libraries and second hand book stores, so even a layman can learn the basics. Oscillator circuits are actually somewhat complex to build to convert from DC to AC, especially if you’re trying to convert to a pure sine because the device actually requires a pure sine (like a laptop or some specialized testing equipment). Rectifier circuits are a joke to build assuming you have access to diodes that handle the voltage input and a cheap cap to smooth the output.

From what? Steel stock, a pre-existing engine block plus scrap, a complete set of engine parts?
I can certainly see rebuilding an engine, and especially stripping parts from other similar engines, but from scratch would be beyond a stretch.

Same for Electronics 11 and 12, with the Electric Motors.

IIUC this is actually a bit more reasonable, though you’re going to limit your current and efficiency if you’re spooling ordinary insulated wire to make your windings as opposed to whatever goes into a modern electric car.

About a half mile of 38 guage insulated magnet wire in the modern Tesla S motor if I remember.

My idea for my self was to make some really cheap item that requires level 20 to make but can learn by crafting a “book” at level zero which your character could use to level up. Not quite as useful as your idea but it was something.

From what? Steel stock, a pre-existing engine block plus scrap, a complete set of engine parts?

I can certainly see rebuilding an engine, and especially stripping parts from other similar engines, but from scratch would be beyond a stretch.

These things DO exist in America, in New England, despite the best efforts of the corporatocracy to make them extinct by offshoring all the jobs that use them.

For the likes of, say, a big-block, brute-force dumb muscle car engine (such as the legendary 426 Hemi,) it primarily comes down the lack of appropriate tools; and appropriate tools are something a survivor ought to be able to build, with lesser tools but exceptional skill - or to loot, if they feel like locating a machine shop and clearing it of zombonis. After that, the only real issue is the lack of power, and the lack of a building power grid. Both of those could be “simply” solved the nasty, hacky way of simply making them a vehicular tool (ala vehicular welders,) mounting them on a cart with a storage battery and swapping with a battery charged by a solar power station out front.

There are auto parts stores ALL over in the US. Lots of tools sitting on shelves. That’s not even the garages that actually fix engines, have actual lifts.

There’s tons of machining tools too. Nearby town for me isn’t that big and there’s to machine factories in it. 1/4 the town works in one of the two places. One makes parts of all kinds of engines, the other is more specialists as the custom make what their clients want in bulk.

If you don’t have the stock you melt down what you need, use clay for the first few molds. Then make molds from the original stock. That’s been done for a few hundred years.

And, really, most things we use can be crafted in less-than-ideal circumstances, with resources that should actually be fairly plentiful in a city - especially one devoid of other humans using them.

Most of the issue with getting to our current tech level wasn’t with the tools, but with grasping the principles behind what was being done - Principles which we now teach and publish to be widely available.

The model T engine block was sand cast which is a technique thats been around for centuries. Most of a modern engine assembly starts this way still before a 6 axis cnc gets its grubby little mits on it. A CNC machine in three axis is easily homebuilt (zillions of tutorials on youtube) a precise lathe can be made from junkyard parts and cast from concrete (built one as a class project. Low chatter on a cement floor). That leaves a milling maching which can be build from the lathe and a drill press, also from a lathe. I can’t remember the name of the guy but he wrote a book series on builing a machine shop litterally starting with a bucket, sand, charcoal, and a looooot of scrap aluminium and pig iron. And that was in the 70s.

About a half mile of 38 guage insulated magnet wire in the modern Tesla S motor if I remember.

And you’re getting that half-mile (a continuous half-mile, or remotely manageable sections? That makes a pretty big difference) of wire from where? You’re not pulling it out of walls, you’re not pulling it out of electronics, it’s not even reasonable to harvest from an existing motor assembly. Again, we’re back to a modern supply chain supplying just the right product to make the solution work as well as it does.
Then you have things like this: Charged EVs | Elon Musk: Cooling, not power-to-weight ratio, is the challenge with AC induction motors - Charged EVs
Amazingly it’s not as simple as wrapping sufficient wire around an axle, so I stand by my statement that:

you’re going to limit your current and efficiency

Your limitation is going to be much more around:

There are auto parts stores ALL over in the US. Lots of tools sitting on shelves. That’s not even the garages that actually fix engines, have actual lifts.

I can certainly see rebuilding an engine, and especially stripping parts from other similar engines

If you don’t have the stock you melt down what you need, use clay for the first few molds.

That’s a truly massive oversimplification. Yes you can in principle sand-cast a blank to mill out into an engine block, but now you’re talking about getting into large-scale casting (and probably some amount of smelting, otherwise where are you getting your alloys with beneficial properties for engine-building?).

some amount of smelting

More than some, sand casting and smelting are both done on the same site. Methods may have evolved over the years from the bloomery to the blast furnace to the arc furnace, but the process of melt and pour hasn’t changed in the last thousand years. (The finishing processes have gotten significantly more technical as the blacksmith evolved into the hand tool and die machinist into the cnc operator in the factory full of fancy robots with people standing around doing random part QA on the robots work and making sure the PLC programs are still working)

I can only assume that you’re implying that since the process has been exercised for a long time, it means it’s a reasonable thing for the survivor to do. It doesn’t make that case at all.

There’s a massive disconnect between the argument that, “Someone did each of the involved steps at some point in the past” and, “The process as a whole is a reasonable thing for an individual to undertake”.

The latter is the argument you need to make if you want engine crafting in the game, and nothing presented here is even approaching making that argument.

Passive observation on the topic, nothing more. You’ve already marked the topic as not going to happen, but the process of metal working is a subject that’s near and dear to me.

You can mix ammonia, bleach and zombie parts to make a serum which can transform you into a mutant, but machining parts and assembling your own engine is somehow too unrealistic for a survivor to accomplish.

It’s not just lack of consistency between super science items and every day items. Homemade engines aren’t unheard of. The excuse of realism isn’t applied evenly and certainly seems to be used as an excuse to shut down conversation around things you personally don’t feel like should be included in the game.

“We’re not talking about merely getting an aftermarket block and building it up with a unique rotating assembly, or even a custom head that bolts on an existing block. No, we are far beyond that. This is a ground-up, scratch-built, custom engine—as in, everything, including the block, the heads, and the valvetrain are all one-off parts, custom-built in a home workshop (well, a very well-victualed workshop).” 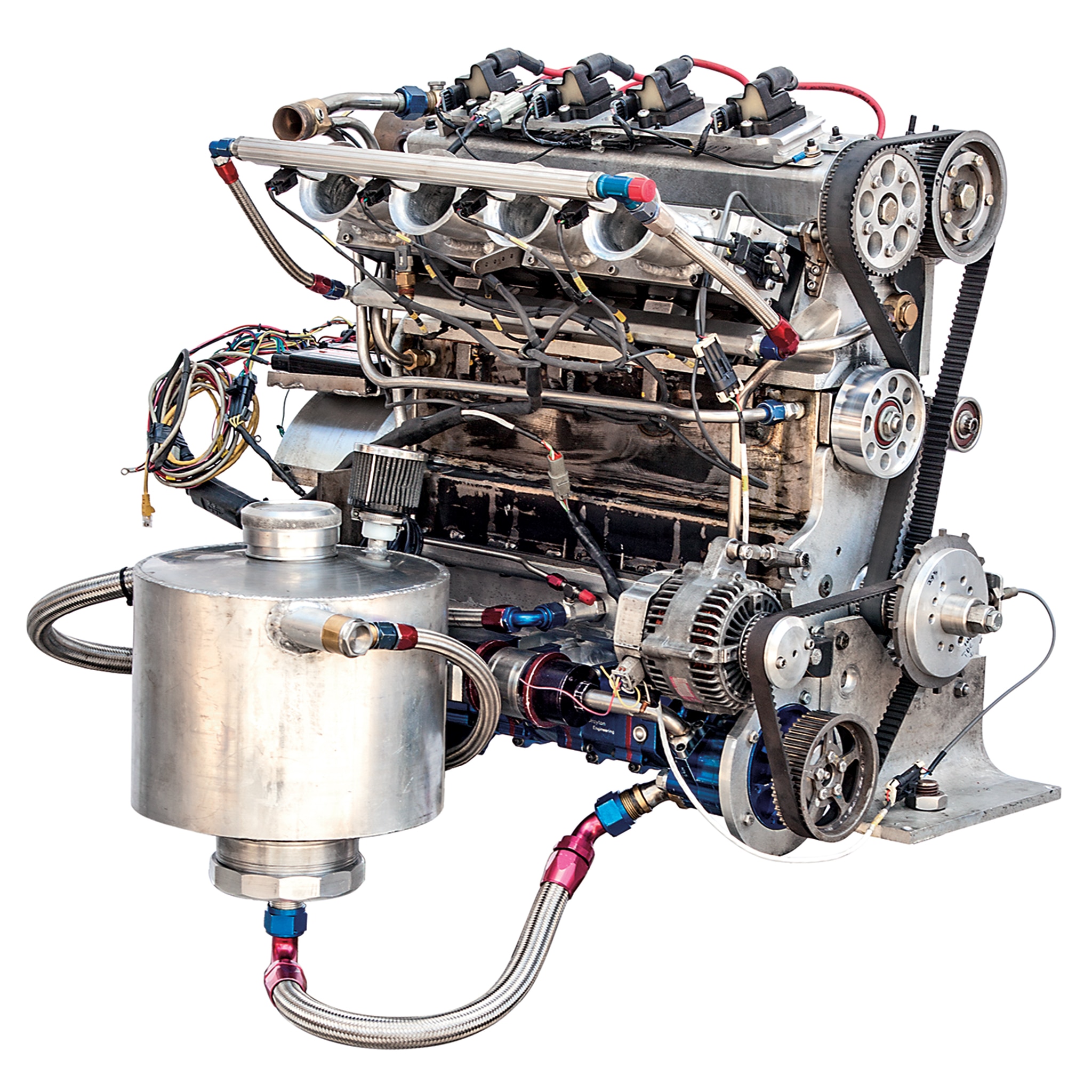 How To: Build Your Own Sheetmetal Engine

Pete Aardema marches to the beat of a different drummer. He Went Ahead and Designed, Fabricated, and Assembled an Entirely New Sheetmetal Engine. Here's how.

It absolutely is unheard-of. If you read the article you linked, you’ll see the engine they’re referencing is a mixture of prefabricated parts, farmed-out work pieces, custom parts, and modified off-the-shelf parts, AND the in-house team is three people working on it, not one, AND they’re using a commercially-sourced workshop and commercially-sourced materials.

All that aside, the tone of the article is, “this is unheard of, but these guys are doing it”.

Sure, it’s not something you’re going to do with an anvil and a hammer, but it is doable. That article is proof thereof; you just need the right machine tools, a fucktonne of time, and 2.5 fucktonnes of Mechanics. The time and mechanics involved can be reduced by using parts looted from extant engines and/or garages.