Are turrets supposed to speak? During my latest misadventures, I ended up combing through the lab I was in in search of a voice that wouldn’t shut up. At first I thought it was a Mi-Go that I had missed, but after combing through every room and exterminating every one I could find, the voices remained. Eventually I figured out that it was the turrets left in the rooms that were speaking, a fact I verified by disarming and reinstalling one on the surface away from any other voices. Here’s a sample of the chatter these guys get up to: 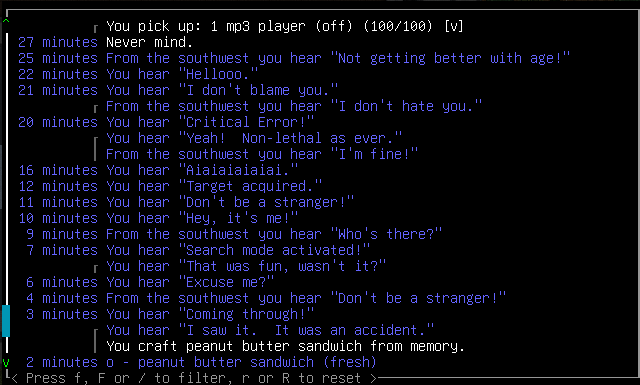 Are you running crazy cataclysm?

Yeah. It’s a standard mod for me, but I haven’t had this happen before. Was this a recent update to the mod?

It’s not recent, but it is Crazy Cata causing it. PR

Weird. I’ve maintained my updates fairly steadily over the past year and some change, and this is new to me. Annoying, especially when I’m trying to move stuff around and the Ignore message constantly demands attention, but nothing some ear plugs can’t fix. Thanks, omae.

I should have guessed it was a Portal reference. Joke’s on me for not playing one of the most memetic games of all time.