What is the loudest noise I can make?

What type of stuff could I use to make a consistent (or at least long enough lasting) distraction to attract zombies in an area to a location either through sight, sound, or smell?

craft yourself a staff sling and kill them all from a distance. Usually 3 rocks/zombie does it.

When in doubt, set a house on fire.

Anything that goes ‘boom’. Explosives on timers. Make some loud enough noises and it doesn’t need to last for long. A few rifle shots always brings attention.

Otherwise, noise emitters would probably work. Maybe a loud explosion and then a stereo system or talking doll. Or burning building

Is cathedrals still a thing? Haven’t seen one lately. If they are, set off the bells and burn it down.

*Edit : from a distance with Molotov Cocktails.

just set a building on fire that will certianly work

My single attempt at setting a building on fire to attract the 20+ zombie group diagonally across the street was a great failure. None of the zombies ambled across the street to investigate, despite me setting off some kind of noise making before setting the building on fire. I did have some limited success in aggroing a few zombies at at time and get half of these to get into the building, but most just followed my character around corners. I’m not sure if any of the zombies that “died” in the building were destroyed, though, as they all seemed to regenerate once the fire died out a month or so later.

The same thing with an office complex that was set on fire for an unknown reason well before I got near it: it didn’t attract many zombies from the surroundings, and most of those that were attracted were revived later (and the basement were infested with quite a few nasty zombies after the building finally stopped burning half a year later).

If the cathedrals with the bells you can trigger are still in game, they used to draw the hordes too well, from quite a few tiles. Even loud noises worked good for a tile or two. Maybe sounds has changed?

I do know that I would run around pulping bodies with a quarterstaff afterwards to keep them from rising again.

I’m going to have to try this out now.

Yes, you need to pulp most of the bodies, but in a lot of cases they rise again before the flames have died down enough for you to reach the bodies for pulping, so you have to take them out manually and then pulp them.

Even if the zombies that get led into a flaming building don’t get destroyed in the collapse, I’ve generally found that it’s much easier to deal with a scorched zombie tomorrow than a zombie hulk today.

Shamelessly reviving old thread as I’m not sure if plows are supposed to be THIS loud… but it might help someone who wants to make loud sounds in the future. 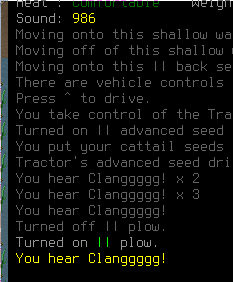 i’d say hardly counts as old, its only a month