The 'V' button lies! I see the cloths with me own two eyes!

–You can ‘clearly’ see that there is some clothing, corpses, and various other things around. Yet, the game insists there is not!
(You might need to zoom in on it) \/ \/ \/ 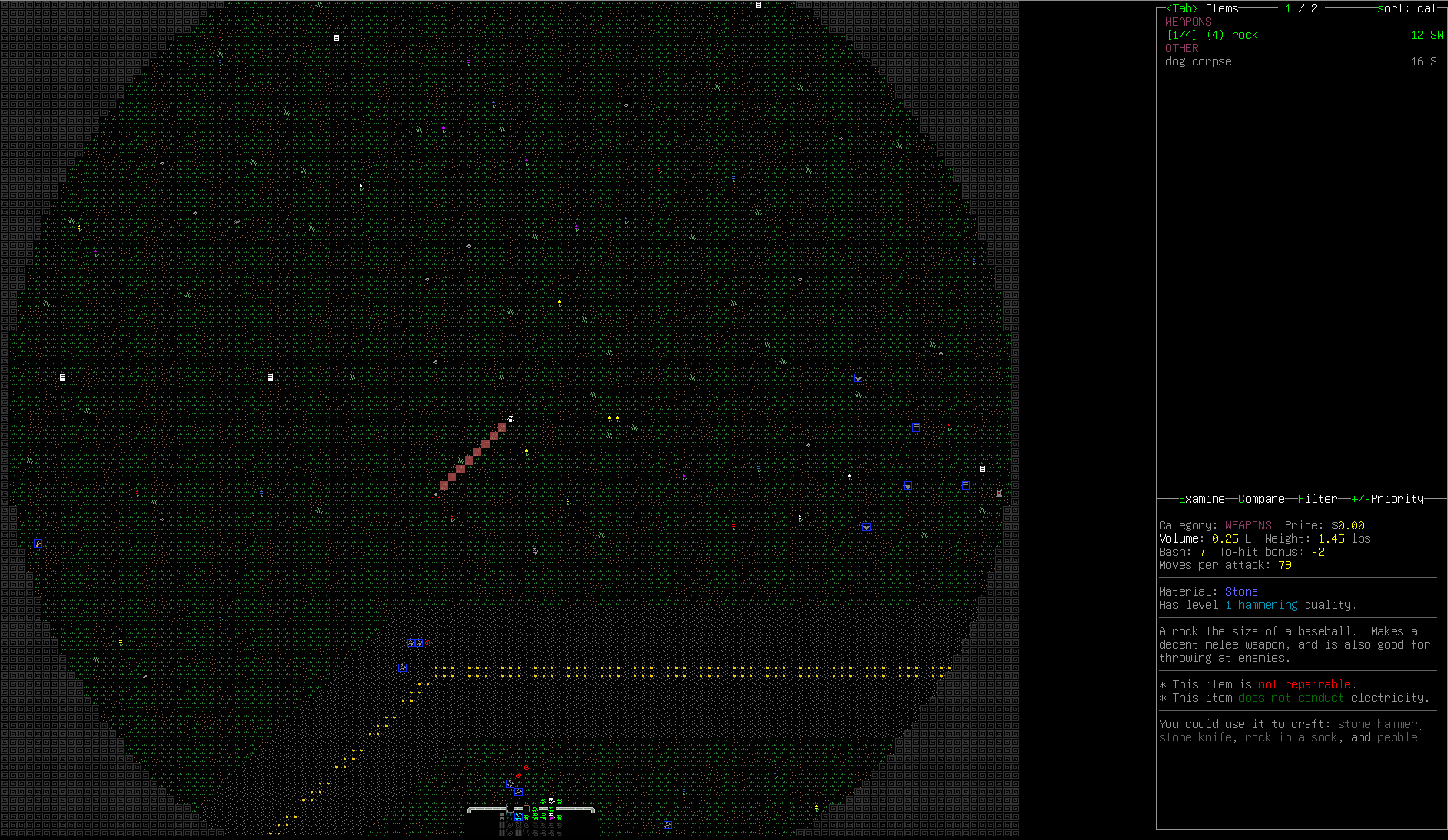 There seems to be a minimum distance on it, since I’ve seen a similar issue where I can happily look at something but it isn’t listed in the nearby menu. Perhaps it has something to do with perception?

My perception is only 7, so that would make some sense in a ‘realism’ fashion, but in game logic I feel that would just be a stupid function. Besides, you can still 'e’xamine it from a distance, thus it really doesn’t seem to be particularly logical ‘V’ wouldn’t work properly at a distance. Obviously, if you sight radius is straight up reduced anyway (Night, for example), then you wouldn’t be able to see what is in the shadows.

should only be distance last I was aware of.

I don’t know why you’re surprised. V is by far the most irritating letter. I’m not surprised it betrayed you, at all.

–What do you mean by ‘distance last?’ I don’t understand that in the slightest. Is that a reference to the code in the game or something?
–Why do you say V is the most irritating letter? Do you have specific reasoning, or is it along the lines of favorite colors and such? You know, “13 is the best number,” or “Pink is the worst color.” In my opinion, 13 is my favorite number. Pink isn’t’ strictly the worst, but I’m not fond of it. And no, that has nothing to do with the topic of ‘pink is a girl’s color’ or anything like that. That is a load of crap.
–Anyway, let’s not go on a tangent about favorite numbers and colors and such. That’s is irrelevant.

o_o I know it was irrelevant. It was a random ‘joke’.

After a quick check ingame without digging in the code it seems the distance at which items appear while using the “V” command is based off of your Perception and seems to use the formula Distance = Pecpetion * 2 + 12.

Yes! I was right!

It’s probably there because you can examine things but you have to be looking at them specifically, whereas the V menu shows everything in all directions. It’s a little helper so you don’t miss good loot.

–Okay, that makes some sense! Although I recently got a nasty black eye due to ‘V’ shenanigans. Basically what happened, is that I was fighting a (mini) horde, attracting them one-by-one, and after I killed them all (which was a slow and tedious task) I went using examine and ‘V’ to attempt to pulp them all. I also forgot to set Lu Hook (My super tentacled follower) back to bashing corpses. I missed a brute zombie corpse. Ow.
–BTW, to mention why I turned off bashing corpses, is because sometimes NPCs will run into a crowd of zombies just to pulp a weak, mundane zombie. In large fights, I set them to either only attack what I attack first, or only attack what you can without moving. So they don’t suicide.

Yep. That is standard practice for most experienced survivors.

While I understand not seeing everything on a corpse. I find it rather odd that the code would deem a person so blind(unless actually…blind) as not being able to see the corpse itself accurately, from 20ft away.

No kidding! “What? No, that’s just a generic lump of dirt! Obviously it’s not a zombie brute corpse soon to rise and attack me!”

distance at which items appear while using the “V” command is based off of your
Perception and seems to use the formula Distance = Pecpetion * 2 + 12.

This do not explain how redxlaser15 are able to see rocks and a dog corpse but aren’t able to see other things on the same tile.

Also this vision restriction is kinda weird and pointless, cause you still can e’x’amine tile and see every single item in there. So this restriction is just annoying and have no real impact on gamplay (except player mental exhaustion).

I think this is just another bug in game code. This game has some problems when it comes to counting and identifying items around the player (for example a infinite ‘nearby’ welder bug).

This do not explain how redxlaser15 are able to see rocks and a dog corpse but aren’t able to see other things on the same tile.

My fault, this things aren’t on the same tile. So Junknown may be right.

Do you have a filter set? Had a problem with forgeting to clear that a few days ago.

I don’t even know how to do that, so unless the game makes one by default no I do not.

I’m sensing a wee bit of butthurt. Not that getting butthurt in the apocalypse isn’t common. #parasites

You obviously just wanted to talk about butts. I wish I could downvote your comment.

I don’t even know how to do that, so unless the game makes one by default no I do not.

You set a filter by pressing f when examining items or using the V to see an item list. This is why you never see an item tagged with [f] in itemlists. If you’re examining a pile of items and use f to set a filter, the filter is deleted when you exit the item list.

While using the V command to see items around you, though, the filter is saved. So even if you save and quit, that filter will be there when you log back in.

So it’s possible you’ve bumped f and now have a filter set, which would explain why certain items are not showing up in the itemlist.

I will personally note that you downvoted my comment if anyone asks. Your opinion matters. hugs

-I have no clue what you are talking about. Why did you suddenly ask that? I doesn’t seem that relevant.
-Although that suddenly reminded me of a Let’s Play I once watched where someone thought they were tearing off the tail of a pig. Simply put, it was not the pig’s tail.

-I don’t have a filter set. I already understand the ‘V’ thing, but I didn’t even think about it when you asked. Still no.