You may have noticed a distinct lack of cars lying around. It does seem a bit strange if everyone ended up as zombies, no?

There’s also the interesting fact that we have no idea what the X does to certain species of animals - only to humans and bugs.

This is an opportunity.

I present, in the form of one of my old-old-forum style “desire stories”, the following suggestion…

He leans against the wall, breathing heavily. He'd lost the zombies a few blocks back, but didn't stop running until he was sure. Sure that they weren't still following him.

As his breathing quiets, he notices a faint sound at the edge of his hearing. A rasping sound, the sounds of a nail file on a rusty pipe. An unfamiliar sound. He puts out a hand, steadies himself against the wall. Part of him screams that he should just run. But he has to know. He can’t afford to not know.

Across the street, a half dozen hunched forms, each a foot and a half to a foot in length, gather round the rusted corpse of a '64 Chevy. Long, rough tongues reach out from misshapen snouts, stroking the metal, catching flakes of rust of and steel, dragging it past blackened and oddly angled teeth into their dark red mouths. An upright, pointed ear twitches, sending a curious fly buzzing away from the creature as it leans back, stretching under the sunlight, before hunching down once more.

It’s rust-red fur diffuses the sunlight, sparse except where it gathers together in thick patches, it’s skin sickly pale underneath visible through the thinner areas. Suddenly, the mass of them, the whole half dozen, seem to freeze. The ears twitch, almost in unison, and turn towards him, pivoting first atop the skull before the heads slowly follow, beady black eyes focusing on his presence.

He freezes. Holds his breath. The creatures watch. Wait. One moves to turn back, his tongue already greedily reaching out towards the rusted steel, when the man makes the mistake of loosing his held breath.

In a flash, one of them jumps, on short but surprisingly strong legs, to the roof of the car, hissing in his direction, it’s fur bristling, it’s body arched as it splays itself across the roof, long thin fingers at the end of long, bent limbs, finding purchase at the edges. The black, wrinkled leather that reaches from it’s arms to its body is dotted with pockmarks, sores and blisters that look to have rusted over. And then, in the next second, it’s aloft, and it’s companions with it. In a staggered, grotesque parody of flight, they come to rest on the roof of a nearby building, watching him warily but not willing to abandon their meal.

The man steps from his hiding place, knowing it’s clear he’s been spotted - and he finds himself glad to have discovered at least one monstrosity that does not seem interested in his imminent death. And then he notices , through the half-eaten door frame of the vehicle, the rifle.

What kind of rifle, he doesn’t know. But it is a weapon. He casts his eyes from the waiting metal eaters to the car, and then back again.

He inches closer. Then steps. Some more steps, and he’s nearly there, the creatures seemingly content to watch.

That’s when he notices the rasping sound. Similar to the many he heard before, but louder. Harder. He blinks, and a shadow falls on him, as the final hunched creature, it’s body hidden by the bulk of the car, finishes it’s long stroke and looks at him. It’s flattened snout and gnarled teeth are reminiscent of the others, but the head is larger. Much larger. A claw lifts from the ground, planting itself on the roof, a not-so-slender arm trailing shredded leather pressing the gnarled, muscled, nearly hairless body of the creature up and into view. It leans forward, the metal distorting slightly as it shifts it’s weight to the arm.

The man runs. The Glutton follows. The man may not be metal, but one can not live on metal alone.

Today, at least, they were eating well.

So what are Metal Eaters and Junk Gluttons? The mutated, revivified forms of the common Little Brown Bat. 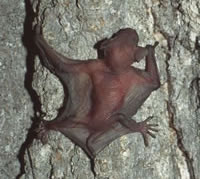 The Metal Eater is a relatively cautious scavenger, weighing maybe 8 pounds, who will not generally try to attack players (unless attracted or angered somehow). They gather around wrecked vehicles and other sources of easily broken down metal, turning them to nothing but dust over the course of a day, occasionally leaving some piece of scrap behind to leave in search of a new meal. They do not live solely on metal, and can digest other things, but it makes up the bulk of their diet. They can fly, although not well, and their bite and claws can do a decent amount of damage.

The Junk Glutton is larger. Much larger. Weighing over 300 pounds, this version of the creature occurs in roughly one out of every dozen metal eaters. It has lost the ability to fly, it’s wings unable to cope with the changes in it’s body, but it’s more than made up for in it’s fast landpseed, vicious bite, and well muscled limbs. It is far more aggressive in defending it’s meals and adding to them, and while it does not prioritize hunting for living food, it won’t turn down the opportunity.

That explains the random road parts, seems cool to find something that isn’t ready to kill you. The ai would just nom on cars unless you get close?

Basically, yeah. If you’re in a base with a car parked outside, they might spawn (in groups) and approach the car as well, dealing damage over time.

So how fast is the damage? I’d hate to come back from reading a book and my car be gone.

I imagine it would be pretty slow. Like, you’d get a good chunk of damage if you left it unattended for days AND got unlucky. But just reading a book… well, if you’re nearby, you’ll be able to hear them and chase them off, and if you aren’t (and left the car uncovered) it might take a bit of damage, but nothing that should be too hard to repair.

Remember, though, they /lick/ the car to pieces. I am imagining them hanging around a car for around a week to reduce it to nothing but scrap, and I doubt they’d have the opportunity to do that with most player vehicles. And parking them in a garage or keeping them in a structure will keep them safe indefinitely.

Hell, technically and mechanically it might be easier just to avoid that damage-over-time happening at all, and entering an area with your vehicle may spawn metal eaters, but then you’ll definitely have time to chase them off, and they only really “damage” the pre-created spawn-damaged vehicles they appear on.

It’s mostly for flavour and greater enemy variety, it’s alright if it’s not a persistent threat to the players mobility (although I think something on that front would be nice, since vehicles are sort of overpowered right now)

I have been pushing this quite a bit.

Why not have parts randomly hurt themselves? (Reduced chance with higher driving+mechanic skill) this would simulate car parts under stress degrading over time with hard driving.
This would lead to lots of fun.

Also: Add car alarms, making running into town totally unprepared to grab a vehicle rather unsafe. It’s the future, I doubt people have stopped using car alarms. Was this an oversight or just cut down because fun>realism?