Is there a need for a detailed mutation guide?

Or is it better for players to stumble around in the dark?

No one is going to force people to read a guide. A guide would make things a lot more accessible to the people who want to have the information and those who like stumbling around in the dark can just not read it.

There is one:
The cataclysm’s wiki

It might be a little out of date but, rather than making a new one it would be better to focus on fleshing that out a bit more.

The problem with that guide is that it focuses on mechanics and lists mutations in their respective trees.
But when I started playing, I was like ‘oh, a flask of mutagen. what can I get from it?’
And the wiki doesn’t make that clear. It just lists all mutations separated in some categories which is cool, but while inhaling gallons after gallons of mutagen, I simply did not fall into any category, instead mutating a lot of times in a lot of different ways and developing random mutations from random trees.
So the wiki just doesn’t answer the question ‘what are my chances to get mutation X if I swallow some mutagen for a breakfast’.

How to fix this? I dunno. A chart, maybe. You are more likely to get some mutations if you have some traits, but it’s very hard to perceive all that list of mutations at once. It’s just too huge and when you get to the middle of it, you already forget what’s in the beginning.

It just gives you a random roll for any mutation the special ones narrow what rolls so a rat serum will give you only rat mutations. The mutatgenic serums however those give you more rolls for mutation. The way you could figure out your chances for mutation is take all the negative ones you can get and all the positive ones and set the negative to 66 percent chance of occurring and then set the positive to 33-34 percent and spin a wheel for it. If it lands on positive check to see if you have prerequisite mutations/thresholds and if it’s all good mutate. Likewise for negative. Flip this if you have the robust genetics trait.

This is rough but works pretty well from what I can tell from my playing around with mutation mechanics.

I know that already. I was talking about the list. There’s just too much information with little to no order. But again, I don’t have the slightest idea how to organize it.

-base mutation
-mutation that needs the base one
-mutation cont.
-etc

Have it kinda like that I suppose and if a mutation needs multiple prerequisites just group them together and if it has multiple dependencies then just list them together like this :

Again hope this helps at all

Yeah, well, that’s either a lot of trees that leave us with the choice problem (what tree to look at), or a single super intertwined one that is hardly readable.

True but it could be done for each tree so rat would be like:

From my experience, focusing on a single tree is sort of useless, that’s why I’m even talking about it in the first place. And I don’t really care about what tree the mutation comes from, I just want to know, considering that I have some traits already, which mutations I’m more likely to get, and which I won’t get at the time.
The absence of a guide doesn’t make mutations useless, it just makes you feel like you’re going to have to blindly find your way through the things that can also damage your character badly.

Ah. Well only help I can give you it the debug menu I believe there is a action in the menu I believe it’s call trait test or something. Either way it’s at the bottom and it’ll tell you how you lean or you can count them and look at the guides for each and count the similarities. You may or may not need to keybind the debug menu.
Hope this helps more than the last few.

Thanks for the info! 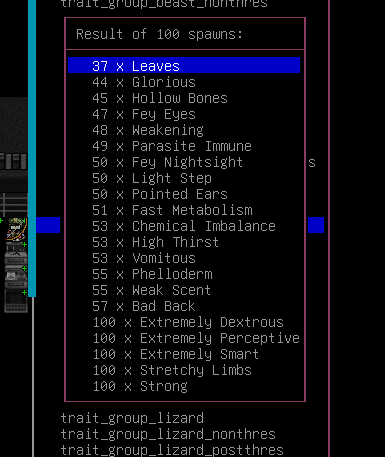 Wow, that’s new. What does this mean? I’m less likely to get leaves and more likely to get strong if I inhale some elf mutagen? Or vice-versa?

I think that is just mutagen in general but if you use like elfa like you said your more like to get the top one… I think been awhile since I played with debug. If you drink the mutagen do let me know what happens kinda curious if it isn’t too much a hassle for you.

Well, that’s a test specifically for the elfa group. I assume it checks for what’s going to happen after drinking the elf mutagen… probably.
Anyway, I’ll let you know if my charater mutates. I’m not planning

Actually, you know what. I’ll just debug some elfa mutagen in.
Here.

And then some ordinary mutagen.

Wow that is hilarious. Science has gone too far we must stop the game before it ends humanity. lol. In seriousness though there was nothing in the group that said weak stomach. Makes me think that tells you how many times you are unlikely to get it. So one is 100 percent chance 2 is less and so on. So you are just seeing the probability in reverse? Makes no sense why it would be like that but that’s what it seems. Maybe the list changed after the mutagen?
I honestly don’t understand what happened

Sorry if this didn’t help you very much.

Yeah, well, we’ll just have to wait until somebody comes here and tells us what’s that all about.
Thanks for the effort, anyway. Nice to see people who care.

That is excellent dialogue gents. One section will go over your play-style and time constraints. It all depends on what you want to explore. Those with no time can cheat with the debug menu. Those with a thousand hours can start 21 survivors in new worlds and begin the process of finding books raising skills and looting labs. Those with a couple of hundred can take advantage of the persistent world feature (so great!) and have their survivors dump all their crap in one pile so you only need one copy of lab-journal Dionne for instance. And I think there a great number of post-threshold mutations that make it worthwhile to persue (acidproof, tireless, regeneration, the +7 stat givers, sabreteeth, tentacle rakes etc).